An Air Force base is like a small town. Each one needs dedicated civilians to keep all the pieces together and enable the Air Force to accomplish its mission. Whether you are beginning your career or bringing years of experience, a career with the Air Force Civilian Service offers great opportunities. 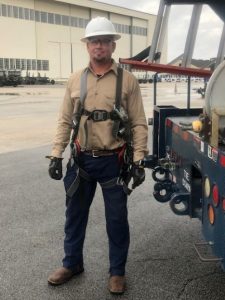 rician at Joint Base Charleston, South Carolina. He came to the job with a great deal of experience, having worked for the power company for 14 years, and most recently helping restore power in Puerto Rico after Hurricane Maria as a contractor. Gehlken says working for the Air Force as a civilian has offered him a new level of satisfaction.

From the very beginning of his tenure with AFCS, Gehlken felt he was treated as one of the team. “They let you know you’re a civilian airman,” he said. “Because civilians provide continuity on base, you’re treated with just as much respect as the airmen. Everybody’s happy here. The civilians are happy, the airmen are happy. People are happy to come to work. You’re not just punching a clock. Somebody is not breathing down your neck: ‘Tell me how many poles you changed out or how many transformers you had, how many feet of wire you pulled.’”

Gehlken’s job now entails variety in many aspects—everything from reading meters to lightning protection system testing to working on lighting on the airfields. The biggest difference in his day-to-day work as a part of AFCS is the importance placed on safety.

“We are extra safe. We take a little more time in planning. If we have to shut off the power, we’ll have a written plan to do so and make sure everybody understands it. We’re not trying to necessarily get as many units done as possible, but we’re trying to make sure the mission gets accomplished.”

In addition to the satisfaction of the work and of working toward a mission, there are the benefits. Air Force civilians are entitled to all the benefits of a federal employee: a generous retirement plan, paid time off and health insurance.

AFCS also makes it a priority to invest in its employees. In the spring, Gehlken is going to Langley Air Force Base, Virginia, to further his professional development. In addition, he’s able to participate in a flexible work schedule.

It is the sense of community that Gehlken says he values most. As part of AFCS, civilian employees have access to the many resources on base, from the gym to the golf course. Even when he’s not working, he is treated as an integral part of the team.

Folks on base make an effort to create a positive environment for the whole team. “It’s very, very family-oriented.”

Gehlken was able to bring his 10-year-old son to see the firehouse on base. Not only did the firefighters let him sit in the truck, but they also showed him the hoses and explained how all the elements worked. Both Gehlken and his son were grateful for the opportunity and for the kindness of the firefighters.

If you’d like to bring your skills and experience to a mission that really matters, click here and take the first step toward your new career with AFCS.